Among some of the food icons of California, such as delicious street-corner hot dogs and tasty oversize pretzels—the classic and popular bagel and lox certainly stands out as one of California’s emblematic culinary titans. Like peanut butter and jelly, in California and around the US, bagels, and lox are an iconic and excellent culinary pairing.

And whether you prefer your bagel toasted or fresh, topping it off with a sumptuous cream cheese spread and hearty salty lox makes it one of the brunch favorites. Some people enjoy it for breakfast. However, where did this fantastic pairing originate? You may also have some other questions, such as what is lox, or lox bagel? Let’s find out.

What are Bagels and Lox?

Bagels and lox is one of the best Jewish deli favorites and usually consists of an open-faced or ring-shaped bread piece known as a bagel that is topped with thinly sliced red onions, cream cheese, briny capers, and lox.

A lox bagel is typically eaten for breakfast and includes both a bagel and lox. One of the most popular and iconic meals in the US, bagels, and lox is both tasty and nutritious. Most restaurants and Jewish delis, such as Brent’s Deli, serve this delectable salmon dish for brunch or breakfast.

Did you know that bagels and lox have a great nutritional value because of smoked salmon? Thus, it is a fantastic snack that you can easily prepare and munch on at any time of the day.

History of Bagels and Lox

You may be surprised to know that lox did not originate in New York City or the US. The same is true for bagels. Like many American culinary favorites, this simple and delicious sandwich is firmly rooted in a hardscrabble and unique immigration story. Keep in mind that in the 1800s, affordable, already-cooked lox, which is a derivation of the common Yiddish word for salmon, laks was undoubtedly a boon to Eastern European Jews living in shoddy tenements with spare kitchens.

So, where did they originate? Lox is a type of preserved salmon that originated in Scandinavia, and Swedish fishermen perfected the art of preserving salmon in the 19th Century. Going back even further, bagels were spotted in China on the famous silk route and were later perfected in Italy in the 14th Century.

Jewish immigrants were able to bring bagels and lox to New York in the early twentieth Century. Salmon was also shipped to the US East Coast from the Pacific Northwest. Salmon was then soaked in brine to prevent it from spoiling during the time-consuming and long journey. However, note that the combination was not complete without the cream cheese.

Today, you will find a seemingly endless number and varieties of combinations of bread, cream, spread, and fish, such as the pared-down purist versions and the blueberry bagel. Even the fish used in this sandwich is frequently salmon rather than lox.

These days, Jewish restaurants and corner delis across California offer their own varieties. However, few do it justice. You may have also heard of schmear. It is a generous slathering of tasty cream cheese on a bagel.

You may know that lox is salmon that has been prepared carefully through a combination of smoking and curing. Nowadays, the term “lox” is used to describe any sliced, cured or cold-smoked salmon. Keep in mind that the Jewish affinity for smoked or salted fish is based on numerous factors.

For example, fish is considered pareve and can be eaten in either a dairy or meat meal. Meat and fish can both be eaten at the same meal, but not simultaneously.

If you are looking for the best lox near me, you will find hand-sliced smoked nova salmon at Brent’s Deli with one slice of lox or lox appetizer. You will find lox is quite nutritious as salmon contains unsaturated fat and proteins. You need all these nutrients for your overall health.

The term sable is frequently used when people talk about cod. Black cod is one of the fish in the sable family and is actually what you get when you ask for a sable.

You may wonder why black cod is called sable. This is most likely because this fish is truly exquisite and sable sounds more refined or elegant. At Brent’s Deli, you will find Wild Alaskan black cod baked in-house, well-known for its buttery texture.

A smoked whitefish is certainly a thing of beauty. This is especially true when it weighs between 4 and 6 pounds. In addition to being offered whole, skin-on, or filleted, whitefish is frequently presented on a platter alongside other delectable foods during large events.

An excellent source of protein and rich in healthy omega-3 fatty acids your body needs, baked salmon is one of the best choices for healthy weeknight meals or fancy dinners. Enjoy Atlantic salmon baked in-house at Brent’s Deli to satisfy your fish cravings.

If you enjoy the taste of Jewish cuisine and do not mind the smell of red onion, lox, and capers on your breath, you should visit Brent’s Deli. The deli has an impressive selection of tasty smoked fish, cream cheese, and other appetizers. The bagels are soft, and the lox is smooth and fresh.

Also, it isn’t overflowing with ingredients, making it perfect for eating on the go as you stroll around Northridge. If you are looking for catering Northridge or catering Westlake Village, you cannot go wrong with Brent’s Deli.

You can also enjoy some bagel and lox from the comfort of your own home! We ship nationwide with Goldbelly! No matter what time of day, Brent’s Deli has got your craving covered! 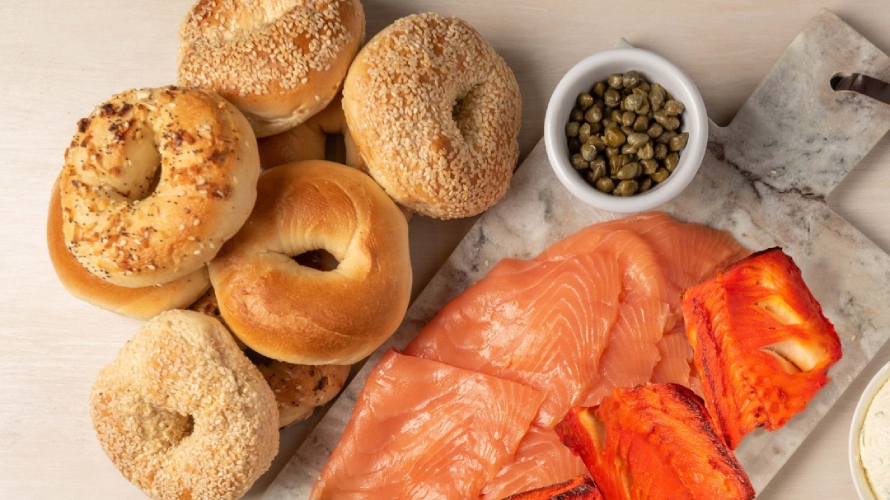