This story first appeared in the Summer 2013 edition of “The Bagel.”

“I told him we can go on a date as long as it was for breakfast,” recalls Jennifer, “and as long as I got to pick the place.”

So they went to Brent’s Deli in Northridge, where Jennifer’s grandparents had taken her and her brother for years.

“My best friend told me, ‘If he shows up with flowers, he’s a keeper.'”

Right on queue, Joel met her with a bouquet of sunflowers — “my favorite,” she says with a smile.

Five years later the two married, and at their wedding they paid tribute to where it all began.

“Instead of having numbered tables, each table was the name of a restaurant that was special to us,” Jennifer says. “Brent’s Deli was obviously one of the tables.”

10 years later, what happened on that spring morning in 2003 is now a lasting tradition. 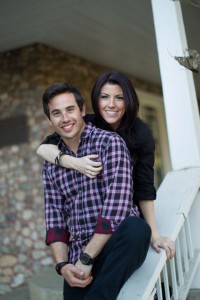 “It doesn’t matter when April 15 is,” Jennifer says. “We both take off work to come to Brent’s Deli for breakfast.”

Jennifer and Joel are expecting their first child in February 2014. Jennifer told us, “we’ll be serving Brent’s Deli for the baby’s welcome-home party.”

Do you have a funny, emotional, uplifting or otherwise interesting story that involves Brent’s Deli? Submit it here.