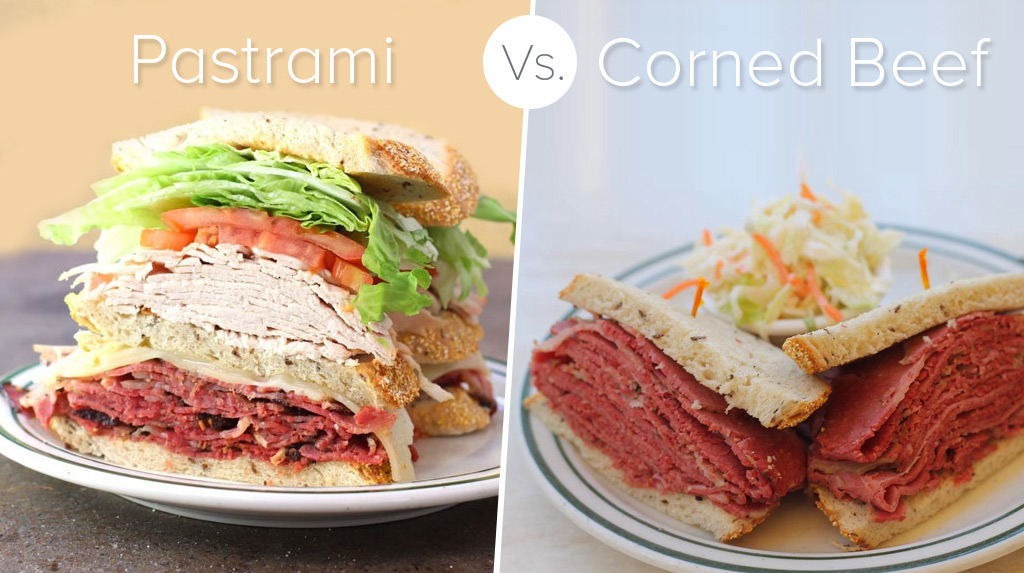 When choosing meat for your sandwich, you might get confused between corned beef and pastrami. Though both are beef cuts, they are different in terms of how they are cooked, processed, and used. If you’re into these Jewish delicatessens, here is all you need to know about the most delicious cuts.

Pastrami is one of the popular solutions that our ancestors used to preserve meat without a fridge or refrigerator. Descending from an ancient jerky called basturma, the meat product has a Romanian origin.

The preserved meat is a highly – seasoned smoked piece of beef, served in delicate slices. This Jewish Deli is made from a fine brisket; however, you can make it from turkey or lamb as well. Generally, chefs use certain cuts, such as the deckle. It is a lean, wide, and firm shoulder cut for pastrami. Sometimes, they use the navel, juicier and smaller section just below the ribs for pastrami.

Once cut, they dry the meat before rubbing it down with traditional herbs and spices, such as garlic, salt, black pepper, cloves, coriander, and mustard seeds. Finally, they smoke and steam to preserve it for a long time. 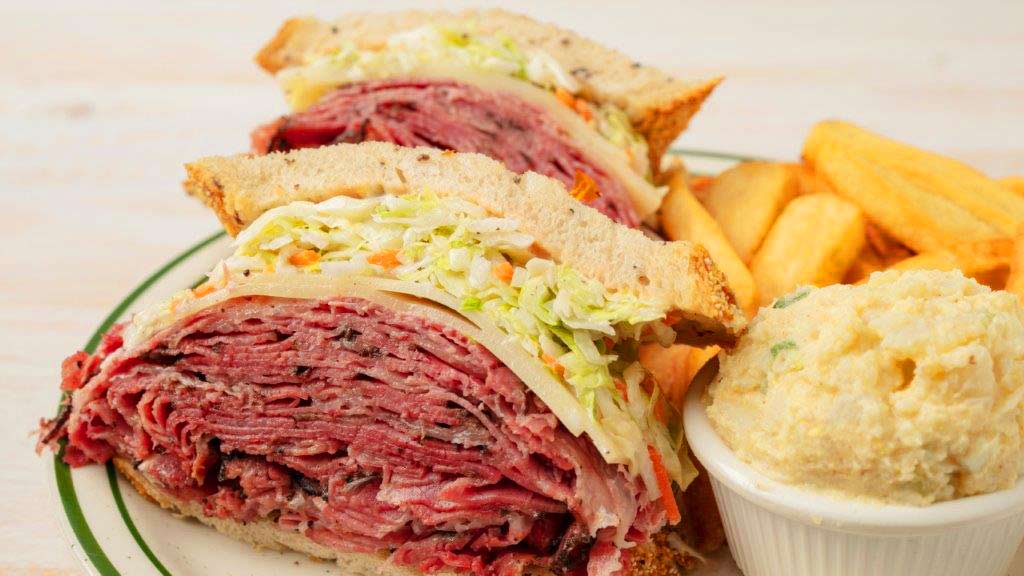 If you don’t like beef brisket cut for pastrami, you have an option to use a beef round or beef plate. It is essential to cook pastrami thoroughly until the connective tissues of the meat break down completely. Plus, you need to keep the raw cut in the saltwater before steaming.

After cooking the meat, you can serve it as shredded or sliced pieces. Though the Jewish delicateness was famous in Romania only, now it is one of the most sought-after dishes in the US, Canada, and Europe.

What is Corned Beef?

Corned beef originated in the Middle East and Europe. Like pastrami, corned beef gained popularity due to its preservative quality. That means you can keep this delicacy for a long time.
If you think corned beef uses corn, as its name suggests, you’re mistaken. It is called corned beef because it uses large corns of salt. Sugar, herbs, and other spices are also key ingredients in the corned beef’s recipe that give it a wholesome flavor.

As salt has sodium nitrate as its main constituent, it makes a great preservative component. The spice can reduce the risk of botulism and make meat safe to eat, even if it is already cooked.
You can make corned beef by boiling the brisket of beef. The heavier the brisket, the longer it will take to cook. Once cooked, you can slice the meat and serve it. 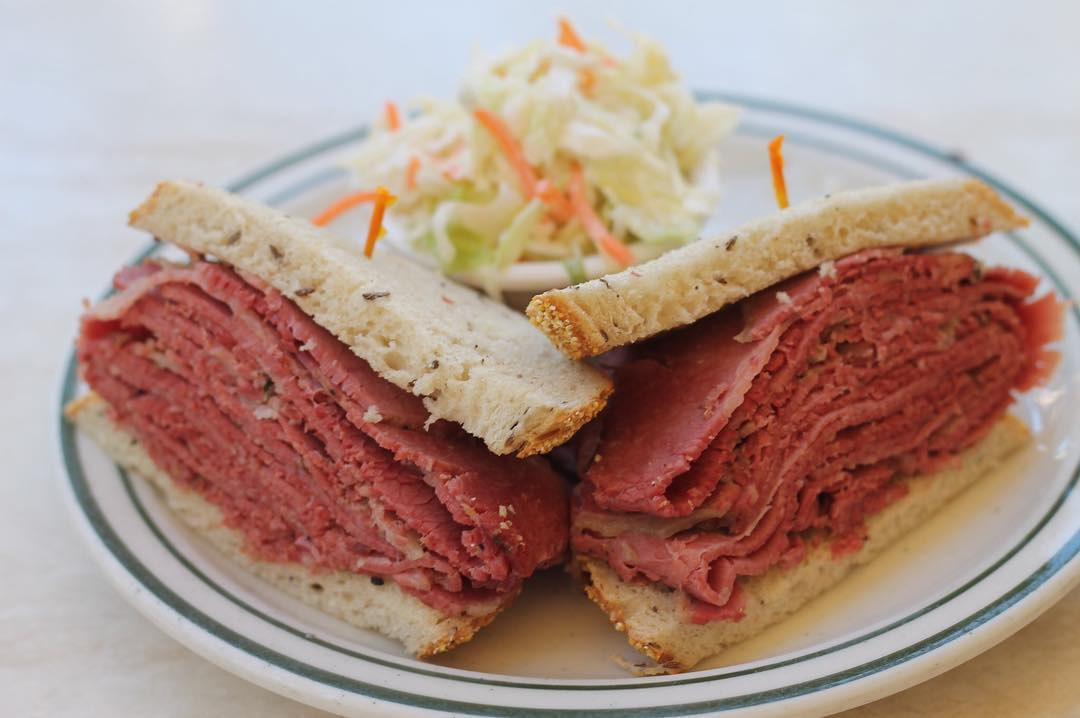 The Key Differences Between Pastrami and Corned Beef Dishes

Pastrami vs. corned beef has one of the pressing debates you might have come across at different deli counters. You may not know that corned beef and pastrami are different dishes. Let’s clear this confusion by highlighting some key differences between the two cuisines.

Keep in mind that both corned beef and pastrami require some preparation time. The beef dishes start with huge meat cuts and need proper seasoning. However, you may find the seasoned meat more flavorful in your pastrami sandwich than corned beef.

It is because it uses more spices, like garlic and coriander, unlike beef cuts in corned beef.

But it doesn’t mean that you can use more spices or seasoning in it. You may add more seasoning to corned beef, depending on how much you like it.

While beef is the common meat source for corned beef and pastrami, they have different types of cuts. Usually, brisket is used for corned beef. It is the lower area of a cow’s chest. Meanwhile, brisket for pastrami comes from the beef plate, shoulder, or cow’s naval area.

One ounce of brisket in pastrami has 40 to 41 calories and 1.5g of fats. It is a source of 5 to 6g of protein. Pastrami doesn’t contain a healthy amount of minerals and vitamins; it includes a lot of salt (sodium). You can get more than 248 mg of sodium in each ounce.

This is probably the most interesting part if you’re fond of jewfish delicatessens and corned beef. Though both are two meat products, corned beef and pastrami have different ways of serving.

Corned beef is a popular Jewish deli in the US. It is one of the most served dishes on St. Patrick’s Day due to its Irish heritage.

The best way to savor all the flavors of this delicious treat is to order Hot Corned Beef or Corned Beef Reuben with Russian dressing and Swiss cheese from Brent’s Deli. You can also go for the corned beef sandwich to treat your taste buds.

As said above, pastrami uses more spices and blends than corned beef. The brisket is typically smoked in pastrami, whereas cut in corned beef is boiled with salt.

Are there any Similarities?

Which is Healthier: Corned Beef or Pastrami?

Though pastrami and corned beef have the same nutritional elements, like protein and fat content, they have different quantities of salt. The sodium content in corned beef is higher compared to pastrami. Because of this, many people consider pastrami healthier and more flavorful than corned beef.

The main difference between corned beef and pastrami is the way they’re cut and processed. Plus, after cutting and curing, corned beef is boiled, whereas pastrami is smoked and steamed.

Whether you have a taste for Corned Beef or Pastrami, you will find an expansive list of items on the Brent’s Deli menu.